How do the COO and CEO work together? 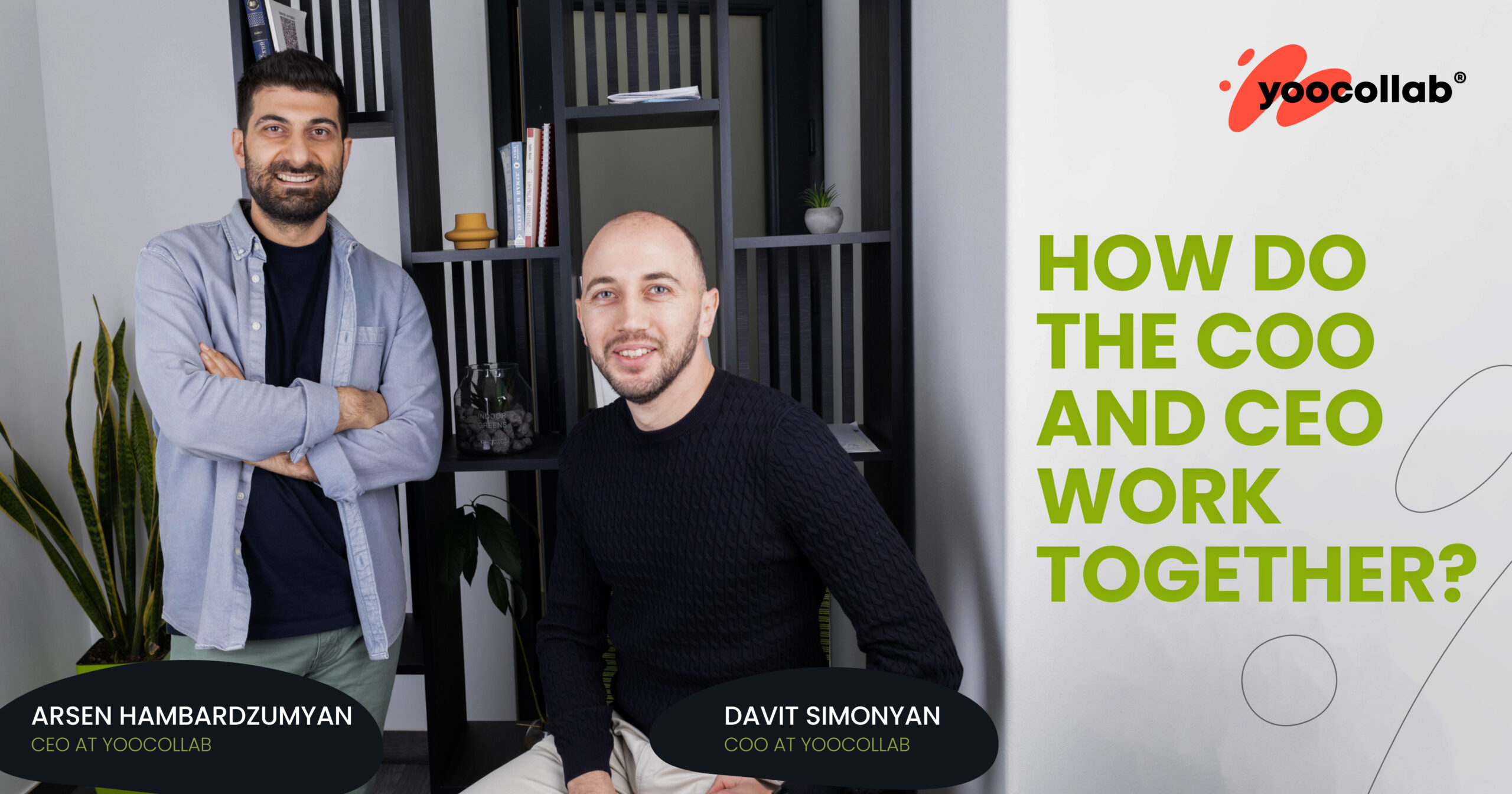 The  CEO (Chief Executive Officer) and the COO (Chief Operations Officer) are two of the highest-ranking people in any organization. Their roles differ significantly from each other, but as the people in charge of the organization, they work together continuously, overseeing day-to-day operations, and developing processes and strategies for the company’s long-term success. So, it wouldn’t be an exaggeration to say that the success of any business largely depends on the successful cooperation of these two employees.

In every company, the way the CEO and COO interact will differ significantly. From our experience at YooCollab spanning through years, each partnership is different and has its unique qualities. However, for this partnership to flourish, several factors need to be present. In this article, we’ll take a deep look at them, and share our experience.

Let’s start at the beginning. To better understand how CEO and COO can work together for the success of the company, it’s important to first understand what exactly each of them does, and what are their responsibilities.

What does the CEO do?

CEO stands for Chief Executive Officer. It’s the top position in any company. A CEO is the person ultimately responsible for the success or failure of the company, as they are the ones responsible for implementing existing policies, setting up future strategies, overseeing company transformation, and improving the finances of the company, all while balancing employee needs and well-being.
While CEO roles are more or less the same from organization to organization, their duties can vary depending on the size of the company, the stage of development, and other factors.

What does the COO do?

The COO is the Chief Operating Officer of the company. The COO is the second in command in the company, and their role is to take the ideas, strategies, and vision of the CEO and implement them. As the name of the position suggests, they oversee all operations of the company and ensure that the team works effectively towards achieving the goal.

CEO and COO work in extreme cooperation with each other, and, as mentioned in the beginning, there are several factors that can contribute to this cooperation being effective and successful.

When the CEO and COO start working together, it’s important that they have an honest conversation about what are their strengths and weaknesses, as well as what they expect from each other in terms of work. As two highest-ranking people in the organization, they will be dealing with different aspects of company development, and it’s important that nothing gets left out or mismanaged along the way. This will then become the first draft of the company operation manual, indicating who oversees what. This will help avoid confusion and operational errors in the future, as well as result in a more fruitful collaboration.

Trust and Respect Towards Each Other

No matter the dynamic of CEO-COO cooperation, and how you decide to divide responsibilities, for your collaboration to be effective, it should be founded on mutual respect and trust. It can often happen that CEO and COO have drastically different opinions about a certain issue or an idea, and they may even argue about what is right for the company, however, when there is trust, it’s easier to reach a common agreement because both people have the same goal of leading the company to success. In a cooperation based on respect and trust, it’s easier to achieve a mutual understanding, and present a united front.

What is the secret of every relationship, professional and personal? Effective communication! In the case of CEO-COO cooperation, having regular dialogues on the goals, operational processes, and outcomes is critical for the mission to move forward. The COO must be open to discussing and understanding the CEO’s vision, and the CEO needs updates from the COO on the operational side, to understand if the strategy is working.

With this said, Rome wasn’t built in a day. Company change and growth is a series of smaller steps, based on a bold vision and operational excellence. The CEO needs to have confidence in the COO, even if the results take time to become visible. COO, on the other hand, needs to share even the smallest progress to show that work is being done.

How CEO and COO Work Together: The Case of YooCollab

While the points mentioned above are more or less common and accepted practices, as mentioned earlier, each organization is different. And so is the cooperation between the CEO and COO. YooCollab isn’t an exception in that sense.

Our CEO and COO have formed a close-knit work relationship over the years, which evolves to match the growing needs of the company. And during this time, this relationship has developed several unique qualities that worked well for us and we’d love to share them.

Involvement with the team – At YooCollab, both people are highly involved with the team and the daily operations. Our COO isn’t there to give orders: he has made a rapport with every team member and takes a close part in everything going on in the office. He is aware of every small detail and is heavily involved in keeping the team happy and the work effective. This he shares with our CEO Arsen, who has the same level of involvement with everything that’s going on within the company. While there is still a clear division of responsibilities in regard to work, it’s safe to say that at YooCollab, we’ve abandoned the top-down approach.

Communication – As everywhere, disagreements happen. At YooCollab, when David and Arsen have any disagreements, it remains behind closed doors. When the decision has been made about what’s best moving forward, and even if their perspectives are different, they present a united front and represent each other’s interest fully.

The success of any company can be boiled down to doing things and doing them right. In this regard, the CEO-COO “marriage” is the most important tandem in any company, as it can make or break a business. In order for this partnership to flourish, both parties need to know their responsibilities, have respect and patience toward each other, communicate clearly, and be willing to put effort and time to form a bond that will work.