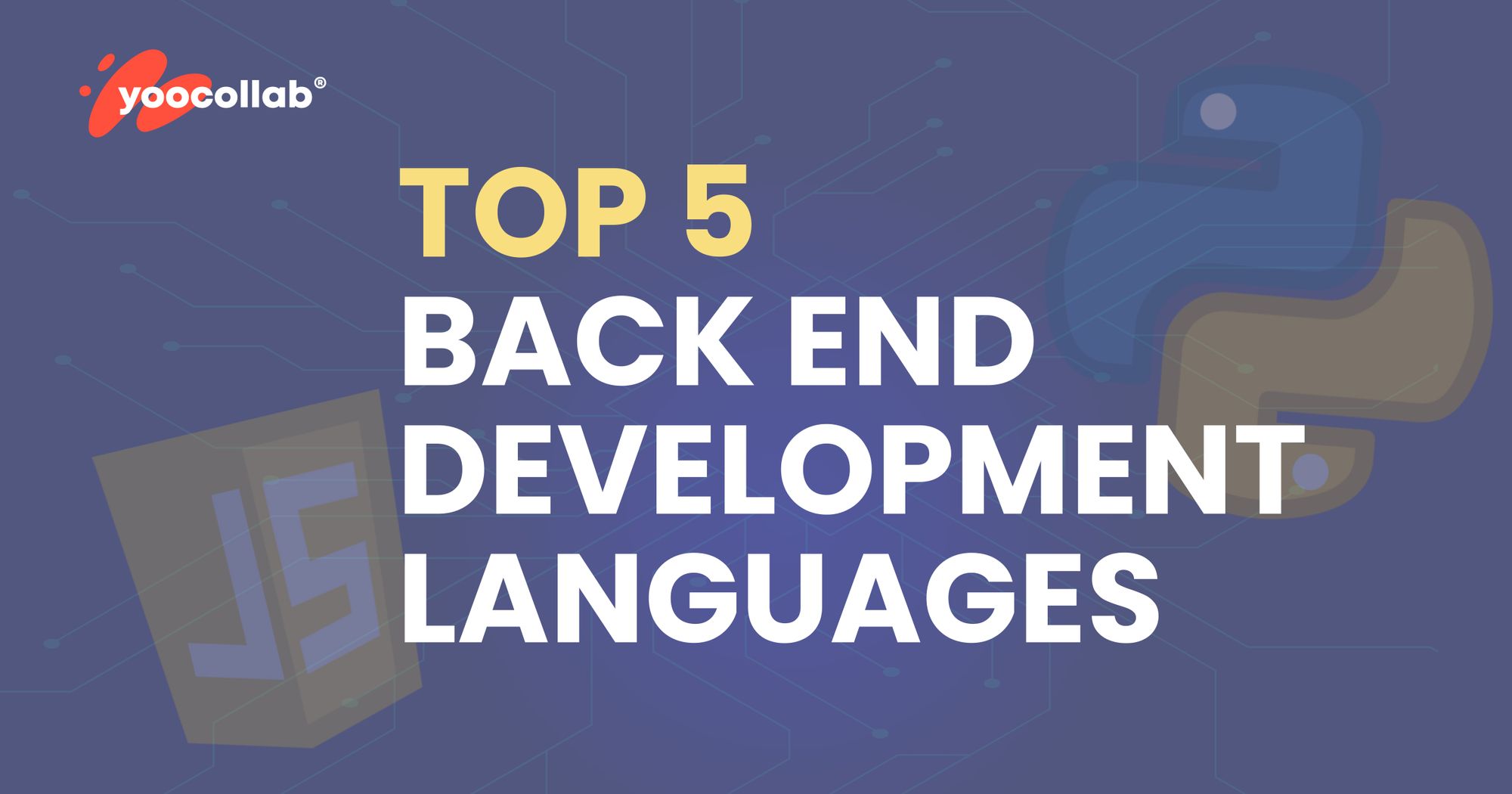 Today, developing highly functioning software applications is a key undertaking for any business to be successful. Fortunately, advancements in the field of software development have presented business owners with a large number of options for back-end development, to ensure the smooth operation of their software.

However, this comes with its downside: there is a plethora of software development languages and even more frameworks, and choosing just one technology from this list of options can sometimes be overwhelming.

To help you avoid the confusion of which software development language you need to go for, we’ve made a list of the top 5 back-end development languages you can use in 2022 to ensure the high-level performance of your website or app at all times. We’ll be taking a look at some of the main features of each language, how used they are, and how much hiring a developer will cost on average. Let’s get the ball rolling!

Whenever there is a talk about software development, most probably the name of JavaScript will be mentioned. And for a good reason: this language has recently become one of the most popular programming languages worldwide, being the language of choice of approximately 12,5 million developers. One reason is that it can be used both for back- and front-end development. The language has many frameworks that are used for back-end development (Next.js, MeteorJS, etc,) however Node.js is the most commonly used one. Its popularity has been growing exponentially during the last years, and it’s currently used by giants such as Netflix, Twitter, and PayPal, among others.

JavaScript is a powerful software development tool for back-end development and provides engineers with a set of powerful tools, such as Light-weight Scripting language, Client-Side Validation, Dynamic Typing, and many more.

Salary: When it comes to the salary of a JavaScript backend developer, it largely depends on the location, the framework, as well as seniority level. Naturally, hiring more experienced developers will cost more than working with juniors. Taking these variables into account, JavaScript developer salaries around the world can range between $47,000-$120,000.

Known mainly as the language used in Data Science and Machine Learning, Python is also a powerful language for back-end development. So much so that it’s one of the 3 primary languages used by Google (alongside Java and C++!) Python is an object-oriented programming language with a simpler syntax than many other languages and is platform-independent. A major advantage of Python is the availability of standard libraries developers can freely access and use. Other benefits of Python include better code readability and easier integration with other languages, to name but a few. As a result of these advantages, according to StackOverflow, Python is among the fastest-growing programming languages, with 8 million developers worldwide. Django, Flask, and Pyramid are among the more widely-used frameworks of Python.

Salary: When it comes to salaries, Python developers are on average paid more than JavaScript developers. The average salary of Python developers is around $110,000, with the entry-level range being somewhere around $80,000. The prices, however, vary in different countries.

Another back-end development language on our list is Ruby on rails (RoR). The main advantage of RoR when it comes to back-end development is time efficiency as it offers a variety of tools to speed up the coding process. Because of being relatively easy to learn, RoR is often recommended to beginners who are just starting with back-end development. It supports almost all major platforms, such as Microsoft and Linux, as well as has some very prominent features that simplify both the coding process and the final outcome. Some of those features are Dynamic and Duck typing, Centralized package management, automatic garbage collection, flexibility, and scalability. To make things even better, RoR also has a supportive community of 1 million developers and a large number of available libraries.

Salary: According to Arc Dev, RoR developers make an average of $74,000 around the world globally. This number may fluctuate towards either side depending on where the developer is based. The highest-paid developers are based in the USA and can earn up to $129,000 annually.

No list of top back-end development languages would be complete without Java, an exemplary robust and versatile language used to develop enterprise-scale software, including desktop and Android, and even scientific tools. The key advantage of Java as a back-end development language is that it operates on the Write Once Run Anywhere principle. This means that once compiled, Java code can operate on any platform that supports the language, without any additional work involved. Some additional features of Java include the following OOP concepts, rich open-source libraries, automatic memory allocation, and portability. Because of being one of the fundamental languages in software development, as well as being taught as many computer science academic programs, Java always sees rapid growth in the number of developers using the language. By the end of 2020, the number of Java developers worldwide was around 8 million, growing by 1 million since 2018.

Salary: Hiring a Java engineer for your project is a bit more affordable than in case of JavaScript and Python. On average, it will vary somewhere between $60,000 (UK) and $105,000 (USA.)

PHP, the true veteran in the software development world still stands tall after so many years, being among the most popular back-end development languages, so much so that W3Tech reports that 78% of all websites are using PHP. The reason behind this may be the simplicity: it’s a relatively easy language to learn, is an interpreted language, and runs on every major operating system. Some additional features include cross-platform compatibility, support of many different databases, OOP features, as well as security. Because of this simplicity and popularity, there are around 5,5 million PHP developers around the world, with the number increasing year by year. Laravel, CakePHP, and Symfony are the three most widely used PHP frameworks, but they are far from being the only ones.

Salary: The salaries of PHP developers on average are the lowest in the list. The average salary of a PHP developer worldwide is approximately $65,000, with the US salary reaching up to $90,000.

Choosing on a back-end development language for your software is by no means an easy task, but it’s critical for the overall success of your project. There is no right answer here, as well as there are no “good” or “bad” programming languages: the right language solely depends on the needs of your project. The five languages discussed in this article are widely preferred by developers and companies around the world for their back-end needs, so, chances are, they’ll also be a right fit for you. Take your time and study each closer to see how and if they fit you. Good luck!